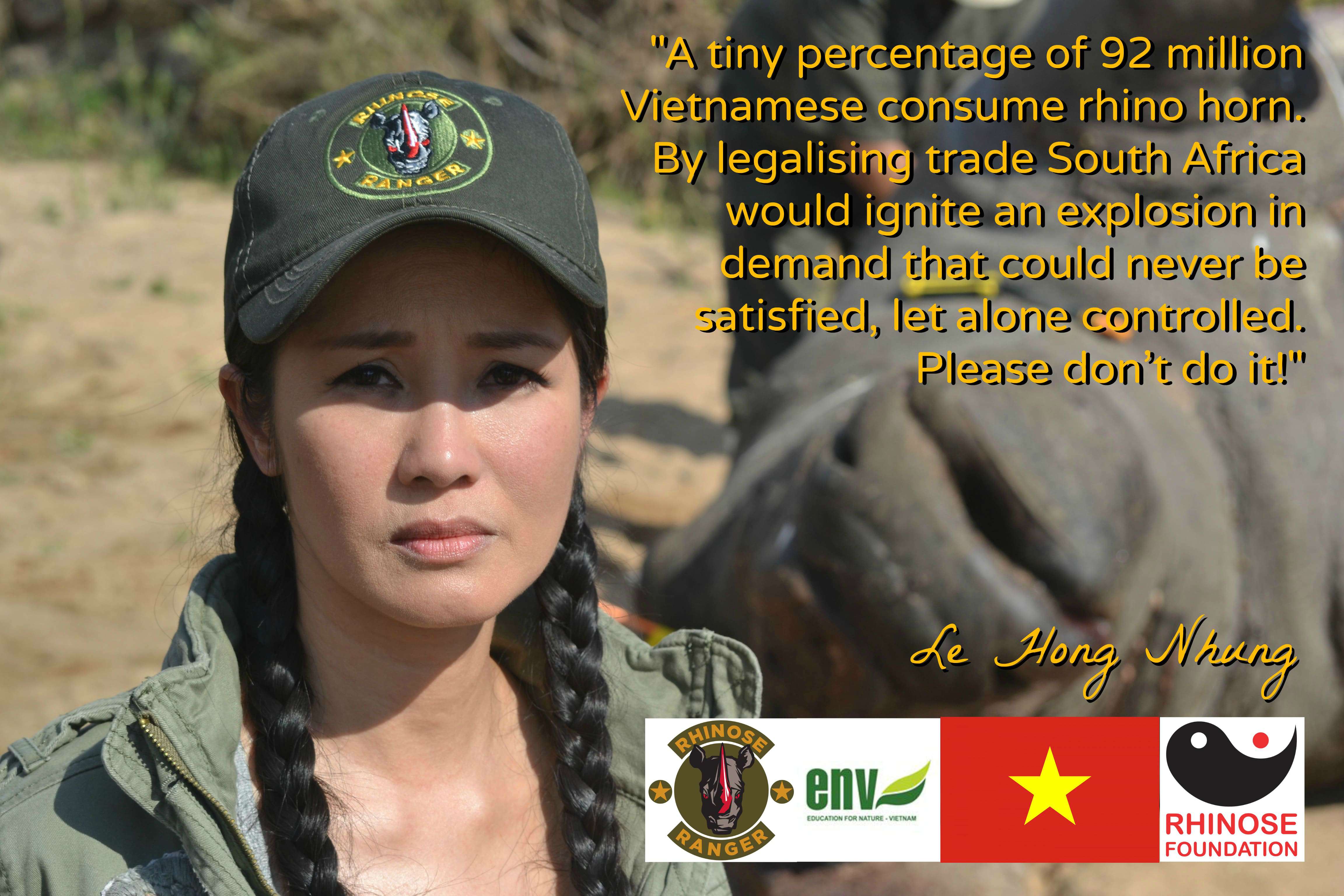 No to a legalised trade in rhino horn being proposed by South Africa
Description
Hi Ellen,
Less than 0.5% of 92 million Vietnamese consume rhino horn, but South Africa is leaning towards asking CITES to legalise the trade at the 2016 September meeting in Johannesburg when the issue will be voted on by the 181 member countries.
This would cause consumption to explode, with a massive surge in demand that could never be met or controlled.
It would have the same effect as when South Africa convinced CITES in 2008 to allow a sale of ivory to China and Japan, which has directly caused the slaughter of over 60% of Africa's elephant in the past seven years since that fateful decision - some 220,000 animals - as tens of thousands of tons of illegal ivory has been trafficked and laundered under the guise of the meagre 102 ton legal stockpile.
Even China has acknowledged that the illegal ivory trade is beyond it's ability to control, placing a one-year moratorium on its own ivory trading, and stating its intention to end to all ivory trading once and for all.
CITES member countries are overwhelmingly against legalisation, as are the majority of SA's public, but the powerful pro-trade lobby, made up of rhino game farmers and trophy hunters are pushing very hard for trade, which is not about conservation, it's about money.
Though the world will not be conned about the 'viability' of such trade in endangered animal parts by South Africa again the problem is that this debate is hugely counter-productive to Rhino Horn Demand Reduction campaigns in Vietnam, as SA's mixed message of "rhino horn is not medicine and cannot cure anything, but please allow us to sell it to you" is causing people to think that it may be legalised next year "so what's the big deal?"
206 views Jun 28, 2015

anonymous
Related Media
Welcome to ellenNation,
The Nation of Ellen DeGeneres, where you can showcase your submissions, add videos, images and receive opinions from other ellen fans & the members of the community. - ellenNation

I should hope by now that most of us are becoming acutely aware of who's trying their level best to stop poaching - by trying to SAVE our Rhinos! - and who's doing their utmost to ACTIVELY OPPOSE all of our Anti-Trade attempts to do so, through Demand-Reduction initiatives & campaigns - to STOP the demand - and therefore the poaching!

Pro-traders are serving to OPPOSE DEMAND-REDUCTION & instead have opted, for profiteering reasons - to FEED the dragon - that DESTROYS OUR WORLD'S NATURE..!

Pro-trade is nothing but a theory. There is absolutely no way of knowing whether it would achieve less poaching, or the negative consequences of horn trade. Trade could further endanger the lives of our people, and put the country at a heightened security risk - as though this isn't already happening with crime! We keep upping our security measures and those costs keep rising - but has the crime rate reduced, as a result of our expenses?!! Not one tiny iota! Crime continues unabated. Criminals walk in, and walk out, every single day - as they do with poaching our Rhinos!

The thing with trade, is that with a projected heightened, security situation - with choppers routinely sortieing over multiple properties (as with our crime situation), what they're proposing to create (intentional or not) is a thoroughly stressful, though diluted war-zone situation across the country. I really don't think trade in horn bodes well for the country, private owners, game parks, or the Rhino in the wild - not to mention the rampant demand that trade creates!

This is seeking to destroy otherwise successful local, and worldwide - demand reduction campaigns, and initiatives - in order to make a killing ('scuse the pun) selling Rhino horn and so-called parts; the aiding, and abetting of poachers, criminals, syndicates, unscrupulous game farmers, hunters, and officials (unbridled greed and corruption). As we're seeing with elephant ivory - once that demand, and poaching reaches such levels - it becomes extremely difficult, and costly to stop, and almost impossible to reverse once established! For the sake of our Rhinos, elephants, pangolins, lions - and everything else - we have our moral duty to support demand reduction campaigns to the hilt; getting the word out there - that trading in Elephant tusks, Rhino horn, and animal 'parts' does nothing much - but EXPAND markets which DESTROYS wildlife, which INTENSIFIES poaching, which RAISES costs of our tourism, and our conservation. Ultimately - it puts our wildlife, our people, our livelihoods, our tourism, and our economy at risk!

We cannot afford the same fatal mistake with the Rhino as we did the Elephant (by selling ivory stocks), simply because they have a small single horn (compared to elephant), therefore the demand and losses would likely be severe, and plough through the animals more quickly. One thing's for sure - if trade is refused by Cites, we're destined to resolve this the old fashioned way - through anti-poaching, law enforcement, and demand reduction (Back to square one, but with less Rhinos in the kitty). This is why anti-traders are "gatvol" of pro-traders opposing all of our efforts to urgently and drastically - reduce the demand, for Elephant ivory, and Rhino horn!

Kelly Pretorius 880 points
Thank you so much for posting this, excellent grasp on what is actually happening to undermine the demand reduction campaigns that have been underway for over a year now in the Asian market. Also pointing out the mixed message that South Africa is sending them by wanting to legalize trade is so very valid.
Jul 5, 2015